Pope Francis and the Righteous Atheists

A lot of my non-believer friends were very excited about the news going around that (as the Huffington Post put it) “Pope Francis Says Atheists Who Do Good Are Redeemed, Not Just Catholics.” They took it as some sort of radical shift towards Universalism or Pelagianism, as if the Pope had said all good people go to Heaven.

Now, don’t get me wrong, I like Francis much more than I did his predecessor, but he isn’t about to show up at the local Unitarian Church for the sacrament of coffee and doughnuts. He didn’t just toss out centuries of Catholic doctrine and catechism in an off the cuff remark. He is on the record that he believes “it is not possible to find Jesus outside the Church,” and that “the [true] gate is Jesus and those who do not enter by this gate are mistaken.”

The misunderstanding is the result of a lack of  education (both among the general public and in the atheist community) about the history of Christianity and its doctrines. In this case, the confusion stems from technical meaning of “redemption.” Francis did not say that even atheists who are good are saved. He said, “The Lord has redeemed all of us, all of us, with the Blood of Christ: all of us, not just Catholics. Everyone! ‘Father, the atheists?’ Even the atheists. Everyone!”

Note the specific reference to the “Blood of Christ” here. Francis is referring to the death of Jesus as atoning for the sins of humanity. In short, Christians believe that Jesus’ death paid off the human debt of sin. (How exactly this worked remains a matter of debate.) In Catholic teachings, this redemption included every human (Calvin, among others, disagreed), but that only includes the potential for salvation. Salvation is still contingent on accepting the message of Jesus. Jesus bought everybody a ticket, as it were, but each person must choose to take the ride.

Some of my friends protested that the really important thing was that Francis acknowledged that non-Catholics, even atheists, are capable of doing good. Again, I don’t think this is much of a departure, at least for Catholicism. There are some wings of Protestantism that would assert that good works are meaningless or even impossible in the absence of faith in Jesus, but such a view isn’t typical of Catholicism, especially since Vatican II. It was the Catholics, after all, who concocted an (unofficial) explanation to spare “virtuous pagans” the torments of Hell.

I do think what Francis said was important, inasmuch as it indicates that he thinks relieving human suffering is more central to the church’s mission than, say, hating gay people or limiting women’s rights. And it is nice that he specifically included atheists in this context. But this wasn’t a Kumbaya moment.

Posted by Jack Collins at 11:32 AM No comments:

Poop. In the Biblical Sense. (Part 1)

[Here’s the original content I promised. It’s a bit too much for a single sitting, so I’ve broken it into chunks.]

So, I was brainstorming presentation ideas for a fellowship interview that never came to pass, trying to find something that would highlight my particular approach to the Bible and really show off my personality.
And then I thought, “poop!”¹

See, the Book of Judges is one of my favorite books in the Bible because it is so…un-Bible-y. Sure, it is framed in this very classic, Deuteronomistic pattern of transgression, punishment, repentance, and deliverance. Time and again, the Israelites stray from their obligations to God, who then sends foreign nations to punish them. When all seems lost, the Israelites repent, and God raises up a leader or “judge” (Hebrew שֹׁפֵט, shofet), who delivers Israel from their enemies. Lather, rinse, repeat.

But within this framework we find stories—some of them very old²—that often seem closer to folk-tales than sacred history, full of sex, human sacrifice, dismemberment, and aggravated tent-pegging.

Now, from Aristophanes to South Park, all cultures have recognized that poop is hilarious. This was no less the case among the ancient Israelites, although they were a little more discrete about it. Still, most of us read the Bible in translation, and not only have translators tried to maintain a certain dignified tone when dealing with scripture, the simple fact is that jokes are incredibly hard to translate, especially when word-play is involved. And Hebrew’s system of tri-consonantal roots lends itself to word play, especially with respect to vowel movements.

One such example can be found in Judges 3:12-30, which recounts how the judge Ehud kills Eglon, king of the Moabites. Eglon’s name (Heb. עֶגְלוֹן), it’s worth noting, bears a striking resemblance to the Hebrew words ʿegel (עֵגֶל), meaning “fatted calf,” and ʿagol (עָגֹל), “round,” so the non-Hebrew reader has already missed that the villain of the piece is essentially named “King Swolencalf.”

Anyway, Ehud is a Benjaminite, and as everybody knows, Benjaminites are left handed. Because “Benjamin” (Heb. בִּנְיָמִין) means “son of the right hand.” (OK, not all of these are winners. Maybe it’s like calling a bald guy “curly.”) So when Ehud is called before the ample King Beefround, he conceals a short-sword on his right side (because who has time to frisk both sides of a guy?), and when the moment is, um, right, Ehud shoves the sword so deep into Lord Tubbington’s gut that he can hardly pull it out, and then…

What on earth does this mean? What does it have to do with poop? Do scatological puns ruin someone’s chances at a tenure-track position? Tune in for our next installment to find out.

¹ While I was procrastinating, Robert Cargill managed to beat me to the punch, with respect to biblical poo.

“I’m in print! Things are going to start happening to me now!”

I received my contributor’s copy of my first published work in the mail today! 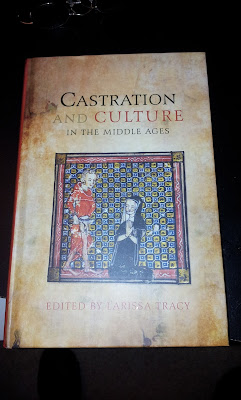 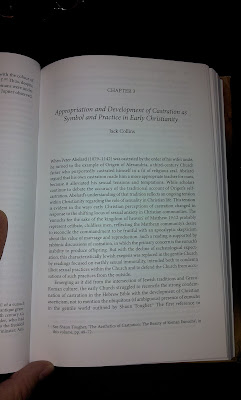 You can pre-order your own copy of Castration and Culture in the Middle Ages from Amazon, or wherever fine books on the history of mutilation are sold. Mine is the third chapter, “Appropriation and Development of Castration as Symbol and Practice in Early Christianity,” covering Matthew 19:11‒12, the Rabbinic categories of eunuchs and ambiguous genitalia, and Origen’s “daring deed.”

I am also chuffed to discover that my dissertation has been cited in Philip L. Tite’s The Apocryphal Epistle to the Laodiceans: An Epistolary and Rhetorical Analysis, also available on Amazon, or wherever fine epistolary and rhetorical analyses of apocryphal epistles are sold.

¹ For those of you who don’t communicate entirely in dated pop-culture references, here is the source of today’s entry title:

Posted by Jack Collins at 4:44 PM No comments: