Pay to play: the cost of scholaring

Yesterday, I went to the Association for Jewish Studies website in order to submit a paper proposal for the annual conference.¹ I was surprised to find that, in addition to requiring that you be up-to-date on my membership dues before proposing a paper (which is understandable), they require you to pay next year’s dues, so you will be current at the time of the conference, and make you register and pre-pay $130 for the conference, before knowing if your paper will even be accepted!

Is this common practice? I have only submitted papers for SBL/AAR and smaller colloquia in the past, and I’ve never seen such a thing. Granted, AJS will give you a refund if your paper isn’t accepted and you decide not to come, but it seems a little prohibitive, especially for those of us without a department to help foot the bill. I mean, I’m lucky enough to have a day job that leaves me with a little money after my student loans and DC-area rent, but for a full-time adjunct, $130 could be a month’s worth of ramen. Or a doctor’s visit for a sick kid. Tying that money up until a decision is made on the proposal can constitute a real burden.
Now, AJS does have a sliding-scale for membership dues, and they prorate your membership so you don’t have to pay for another full year in January if you just joined in November (I’m looking at you, American Philological Society!). But perhaps they should consider—in light of the changes in the market—either extending the student conference discount to PhDs without TT posts, or at least wait until proposals are approved before requiring payment.

There were a couple of opinion pieces on Al Jazeera a few months back by Sarah Kendzior that discussed the financial barriers to non-affiliated scholars, especially in terms of access to scholarly publications. I hadn’t thought about that too much, until I was writing my proposal this weekend. See, my day job is at a major university, so I am accustomed to having access to their library and online resources. But this weekend I realized that if I want to continue research on my own, I can’t really leave this job, unless I can find one at another university. I have limited library privileges as an alumn at UVA, but they have locked down most of the online resources.

I suppose I am spoiled for expecting to be able to do all of my research from my living room in my pyjamas, but that’s my point. The current conditions are creating a class system within academia, where those who are privileged with full-time positions have far more resources than those who do not. Now that the majority of courses are being taught by non-full-time faculty, keeping research materials out of the very people responsible for instructing students can only end badly. More to the point, I’ve already saddled myself with a Mercedes of debt in exchange for entrance into academia; how much more do I have to ante up for a seat at the table?


¹ The proposal is for a paper I’ve been meaning to do for years, comparing the pluralism of opinion found in Rabbinic discourse with that found in Greco-Roman symposia literature. My rabbinics professor from UVA will be pleased that I finally got around to it.

My apologies for neglecting this blog in the past several weeks. My day job has been taking a lot out of me lately, and I made the mistake of reactivating the distracting shiny object that is my personal Facebook account. But I have every intention of adding some meaningful content this weekend.

We have reached the point in the academic hiring season that is roughly analogous to a bar 10 minutes before last call, with a few desperate drunks left looking for anyone to go home with. Most of the TT openings have sent out their official rejections by now (although through the wonder of the Academic Jobs Wiki, you get to find out you didn't make the first cut for interviews in real time!), and all that remains are a few last-minute sabbatical-replacement VAP jobs (and in one case, a fellowship vacated by someone who took one of the jobs I didn't get). So far, the only nibble I've gotten is a single telephone interview for a fellowship.

Now, as far as the academic job market goes, I knew it was a scorpion when I let it on my back. I suppose it would be less frustrating if my day job as a help-desk monkey were more fulfilling, or even if I had some adjunct hours to look forward to after an exhausting day at work. (It's astonishing how much more energy I had this time last year, when I was teaching at GWU, even though I was often up all night preparing my lectures.)

I am really going to have to reconsider how I approach next year's search. I may have to start applying for New Testament/Early Christianity posts in addition to Hebrew Bible/Old Testament ones, because once you eliminate all the posts that demand "doctrinal conformity" or "a dedication to preparing $DENOMINATION clergy," there were barely a half-dozen TT HB/OT openings in the whole country this year. I should probably look into adjunct positions teaching intro Greek, Latin, or Biblical Hebrew classes, too.
Posted by Jack Collins at 12:28 PM No comments:

Oh, I should mention that this blog is now accessible at http://www.worthlessmysteries.com! I also staked out academicbusking.com, although I haven't decided what to do with it. I will be updating this blog more often starting soon. I promise.
Posted by Jack Collins at 1:33 PM No comments:

I found this parked outside my office today. 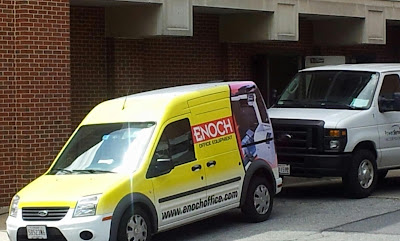 Posted by Jack Collins at 6:16 PM No comments:

...given the title of the blog and all. Ganked from Remnants of Giants. 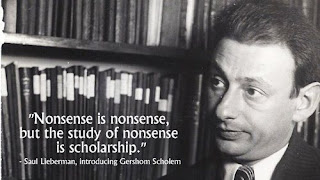 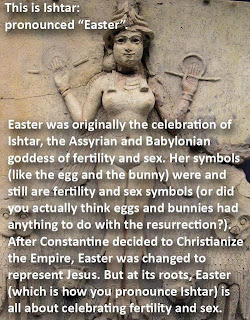 
¹ I will admit that most of my information came from the Wikipedia article on Ēostre, which is unusually well-researched and has references to scholarly discussion on the topic.
² American Heritage Dictionary of Indo-European Roots, “aus-”.
³ DDD, “Astarte,” “Ishtar”; American Heritage Dictionary of the English Language, 5th Edition, Appendix II, “ʿṯtr”.
Posted by Jack Collins at 7:41 AM 2 comments: