The Supernatural Cinema of Guillermo del Toro: Critical Essays, featuring my chapter, "The Birth of Fantasy: A Nietzschean Reading of Pan's Labyrinth," is now available. Because I do philosophy sometimes. 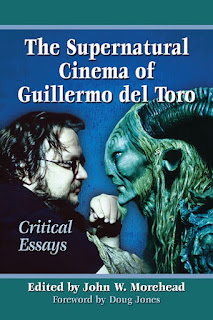 Posted by Jack Collins at 11:36 PM No comments:

The Search for the Historical MLK

Just like clockwork, conservatives inevitably celebrate Martin Luther King Day by attempting to claim him as one of their own. (The first Google hit this year comes from Sarah Palin, who asks on her Facebook that the President stop "playing the race card" in honor of Dr. King.)

The naive argument, coming from conservatives who have never bothered to read anything Dr. King wrote beyond a few quotes from a single speech, is that since King wanted people to be judged by the "content of their character," he must have been calling for a race-blind society free of government interference based on race or economic status.

This is, of course, complete bullshit. King was a radical. He considered unfettered capitalism to be a great evil, and his primary critique of communism was over its atheism, and its subjection of the individual to the state, not with its goal of redistribution of wealth. The full name of the historic 1963 march was "The March on Washington for Jobs and Freedom." King supported ideas like universal healthcare, affirmative action, and GI-Bill style federal programs designed specifically to provide jobs and education for black people. Conservatives mistake his pacifism for passivism, but King was not a gradualist. He didn't couch his calls for justice in terms designed to make white people comfortable; he was calling for a complete disruption of the existing, unjust order.

(If I took the time to cite evidence for these claims, I'd never get this posted, but all of these ideas are easily found in his accessible books Strength to Love and Why We Can't Wait.)

I bring this up because it is illustrative to see how, in less than 50 years, the message of an historical figure--even one who wrote lucidly and prolifically--can be distorted by the mechanisms of social memory. By elevating him to the position of a secular saint, we have in many ways defused the very things that made him dangerous. We remember that he was a man of peace, but we forget that he was using peace to fight a war that is still not won. His message was not "Can't we all just get along?" but "We refuse to 'get along' with a system of violent injustice!" I think this is pertinent to biblical studies exactly because the radical message of Jesus--as near as we can reconstruct it--has been re-written time and again by similar processes.

(This isn't just a conservative problem, BTW. Liberals [particularly white ones] are guilty of sanding down the rough edges of King's message as well, perhaps in an attempt to legitimize the middling, snails-pace gradualism that has come to characterize the Democrats' approaches to racial and economic justice. And there is also a tendency on the left to minimize the centrality of Christianity to King's activism. To be sure, there were plenty of people in the Civil Rights Movement who dedicated themselves to fighting for equality for non-religious reasons, but you can't understand Martin Luther King without understanding ideas like agape, redemptive suffering, and the immortality of the soul.)