Religion and Doctor Who Conference Wrap-Up 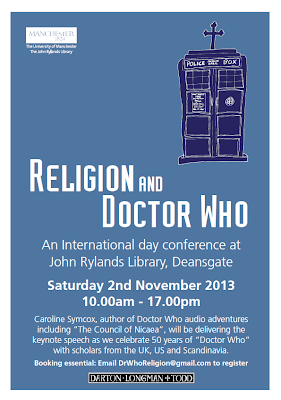 I’m sorry it took so long to pull this together, but here is my rundown of the Religion and Doctor Who conference in Manchester on 11/2. It was a really good experience all around, with some excellent papers and engaging conversation. The cross-section of people was fascinating, and not just presenters but also the audience-members, some of whom had come a good distance, and really contributed to the discussion. I ended up sufficiently engrossed that I didn’t have time to do much blogging.

For the first session, Ann Matsuuchi presented a paper she wrote with Alexander Lozupone called “Birth, Rebirth and Buddhism in Classic Doctor Who,” which was a critical look at how the original program used and appropriated Buddhist themes, especially in the development of Pertwee’s Doctor. It questioned the common perception of the program during that era as anti-religious by broadening “religion” beyond Western, Judeo-Christian presuppositions, and demonstrated a broad influence of Buddhist ideas over the years.

Next up was my paper, “A Whovian Demonology: Daemons, Beasts and Destroyers,” which looked at the various approached Doctor Who has taken to the demonic, from the highly rationalistic “ancient astronauts” explanation seen in  “The Daemons” and “Pyramids of Mars” to the more supernatural and esoteric “Curse of Fenric,” to the Doctor’s post-modern agnostic reaction in “The Satan Pit.” I argued that “The Impossible Planet” and “The Satan Pit” were intended to engage in direct dialogue with the earlier encounters with the demonic, and reflected a conscious effort to embrace the different epistemic frameworks evident in the different Doctors’ reactions to the supernatural.

The next paper, from Michael Spence, was entitled “Reading ‘The Daemons’,” and turned out to be a wonderful complement to mine, because he provided two alternate readings of “The Daemons,” one similar to mine, emphasizing the Doctor’s positivist, materialist denial of the supernatural  as a part of a larger anti-religion theme; and another reading that showed how the episode subverted its own rationalism, for instance, by making Jo’s irrational selflessness the key to defeating the Daemon Azal.

The questions phase turned into a lively dialogue between Michael, me, and a few audience members, about post-modernism and the differences between Moffatt and Davies, and more generally on the show’s ability to play with thematic tensions and provide multi-layered social critiques.

After a break, there was a session about using Doctor who in religious education. The first paper, by Owen Edwards, was entitled “As We See, So We Learn: Doctor Who as Religious Education Broadcasting.” It provided some interesting context about the historical perception of Doctor Who, and its rocky relationship with its status as an “educational” program, and the rather sophisticated approach the show took towards questions of cultural relativism even in early serials like “The Aztecs.” A solid argument, even if it was far enough outside my own interests not to really grab me.

Next up was yet another paper dealing with “The Impossible Planet / The Satan Pit.” Holly Jordan’s “The Impossible Pit: Satan, Hell and Teaching Doctor Who” specifically dealt with using those episodes to spark dialogue about Abrahamic conceptions of evil and Hell in introductory religion courses. It included some fascinating excerpts from students own response papers, and demonstrated a lot of valuable pedagogical insights that I may have to adapt.

The last paper of this session was from Matt Rawle, a Methodist minister from Louisiana, who has used Doctor Who screenings as a way of providing his congregation with a new vocabulary for approaching theological questions. But I’ve got enough of a blind spot for liturgical and pastoral matters that a lot of this one went right past me, I’m afraid. Matt was a heck of a nice guy, though.

The first paper of the third session, “The Doctor and his Iconographic Search for an Ecstatic Human Experience,” by Stacey Embert, was read in absentia, which is a shame, because I would have loved to have engaged the topic more directly. It was a meditation on the Doctor’s fascination with human fragility, and his alienation from the experience of real death, both through his regeneration process and his tendency to abandon his companions before they fall victim to age. There were some fascinating implications for Clara’s role, as the always-dying companion, in the Doctor’s self-renewal.

Jasper Peters’s presentation was something of a homily, using the experience of being the Doctor’s companion as an allegory for Christian discipleship. This is where I ended up speculating about Donna Noble and theosis, since she didn’t just follow the Doctor, she became the Doctor. I also compared her brain burning out if she were to remember the Doctor to the Talmudic warnings against being consumed by fire as a result of contemplating the mysteries of the heavenly chariot.

The third paper of the session, from the winsome Leena Vuolteenaho, was a précis of her wider research into Buddhist and Christian readings of immortality in Doctor Who. She dealt in particular with the problem of eternal life, and the show’s recurring presentation of physical immortality as more of a curse than a blessing. This was a productive foil to Embert’s paper, especially with respect to “Enlightenment,” in which the immortal Eternals have no regard for the lives of “ephemerals,” since their death is inevitable anyway.

The keynote address was, well, a little churchy for me. Caroline Symcox is an Anglican rector and former writer of Doctor Who audio dramas. I was hoping for a little more discussion of the creative and production process, but she was more interested in making some kind of point about “natural theology,” and criticizing the atheistic stance of the current show-runners. She seemed to want to argue that the current producers end up accidentally making pro-religious statements in spite of themselves, which I found a little insulting, sounding a lot like the common Christian cliché that assumes all atheists secretly long for God. (She even used the phrase “honest seeker.” Ugh.) It also seems to assume that atheists aren’t capable of consciously negotiating the positive elements of religion while still denying its factuality. I encouraged her to see “The Book of Mormon.”

Another blogger echoed an attendee’s tweet observing that “the day became more devout as it went on,” although he seems to have found that a more positive development than I did. I would have hoped for a little more straight-up critical scholarship and a little less theology, and there were definitely moments when I felt I was the sole secular voice in the room (not an unfamiliar sensation). Still, shared geekdom can be a powerful force uniting people from different backgrounds, and I had a really wonderful time talking with the other presenters at the pub and dinner afterwards. It was particularly interesting to observe the difference between the British (and Irish) presenters (for whom Doctor Who is deeply-rooted cultural phenomenon from their childhood) and the Americans (for whom it is more of a fringe/cult interest, and in some cases, only known from the revived series). I don’t know what to make of the fact that the one of us with the most encyclopedic knowledge of the original series was Finnish…

I would like to thank Andy Crome for his work arranging the conference, and for giving me the chance to speak. (You should all go buy his and James McGrath’s new book, Time and Relative Dimensions in Faith.) I only wish I had more time to spend in Manchester (which reminds me—not unfavorably—of Baltimore). Certainly the friendliest bunch of guys with shaved heads and neck-tattoos I’ve met in some time, even if I couldn’t understand a word they said.

(I will post a copy of my presentation on my academia.edu page once I have a chance to clean it up a little, which may not be until after SBL/AAR.)
Posted by Jack Collins at 11:24 AM

Email ThisBlogThis!Share to TwitterShare to FacebookShare to Pinterest
Labels: conferences, Doctor Who